I had this old cane travel rod lying around--ferrules were all gone to crap--so made a bunch of bodkins out of it. Great fun. A lot mrore than I need, lol--Christmas presents next December, I guess. 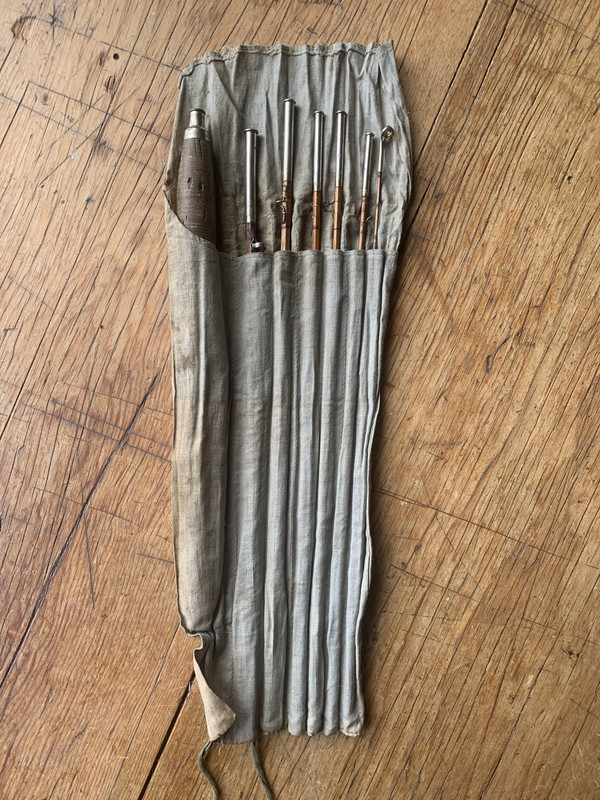 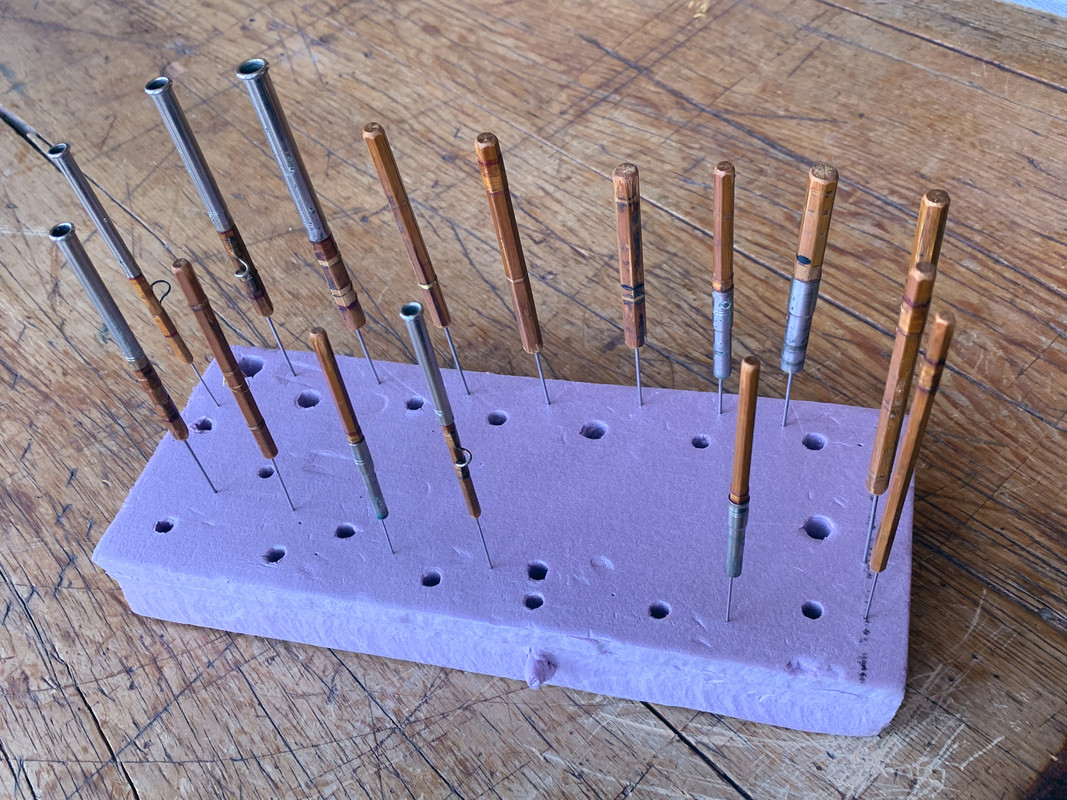 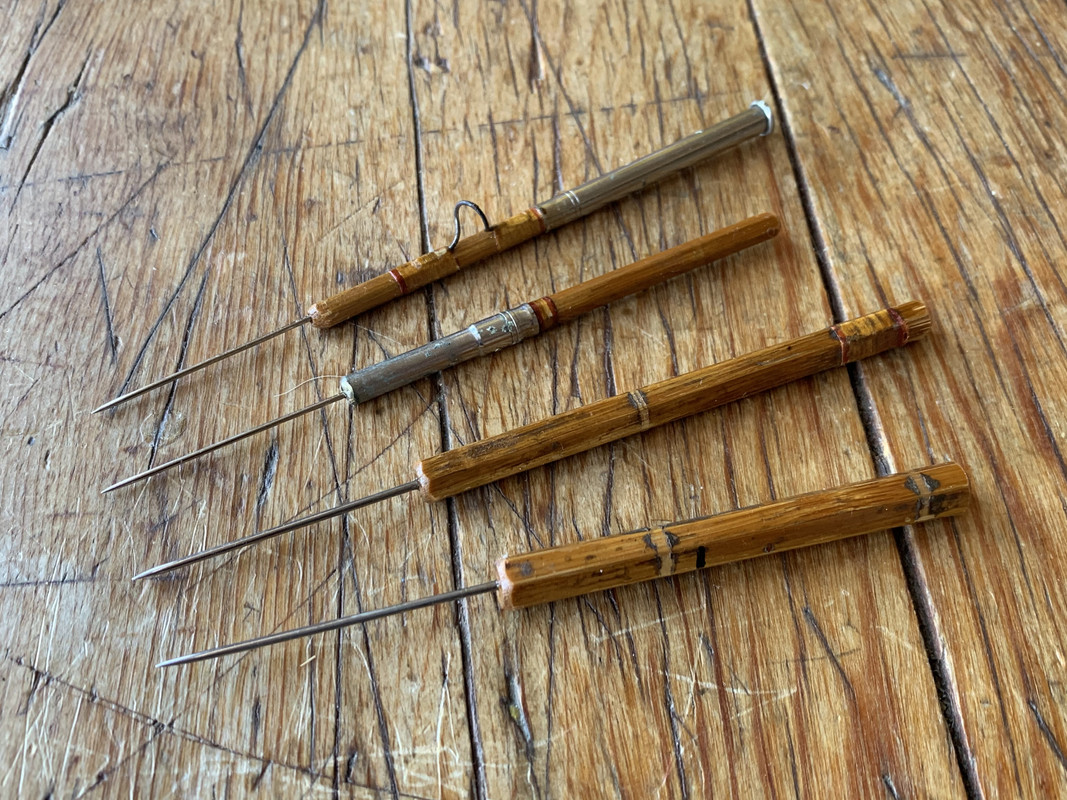 Unique tying tools there, neat looking besides... good for you!

Great idea as bodkins aren't they, BB! I have a few pieces of rod blanks I got from Mike Clark at South Creek Ltd. I bought a custom bamboo rod from him years ago and asked if he had any blank cut-offs to make as bodkins and other tool handles. He sent four or five pieces. I finished two of them as bodkins and one as an Exacto knife blade holder. I treasure those things! The cool thing about them as a bodkin is they don't roll around on the tying table.

Question, what did you use as needles?

There are two sizes: a standard bodkin needle (the two on the bottom), and a rather finer one (the two on top). The bodkin needles I bought on eBay a couple of years ago--they are the same as the standard brass bodkins made in Pakistan. The finer needles came from a friend, and idiot I am I threw out the packaging before taking notes. They were about 3" long. Rather stiff, actually. Not beading needles (which are a bit flexible). A trip to Michael's will probably find you the right needles you need. The fine ones are really good for size 18 and smaller flies.

I used a cut-off saw, which of course tore the cane sometimes--even when I taped it. And a Dremel with a 1/16" bit (the smallest my hardware store had)--which, with a steady hand and a vise, worked fine--though I had to punch the male ferrules to keep the bit from wandering. 30-min epoxy gave me more working time--wiped up with alcohol swabs, and touched up with varnish.

Mike and Kathy use cut cane sections for their thread/CP/varnish tests, and they keep an archive--. I visited them a couple of years ago, and they showed me their drawer of tests--another good use of 'off' or broken sections. II like using old rods with the original wraps and patina for some reason--I'm surprised more rod builders don't sell bodkins with their leftover sections. I know Aroner sometimes does. But I will say this: Mike and Kathy were extremely welcoming and it's about as good as it gets--. 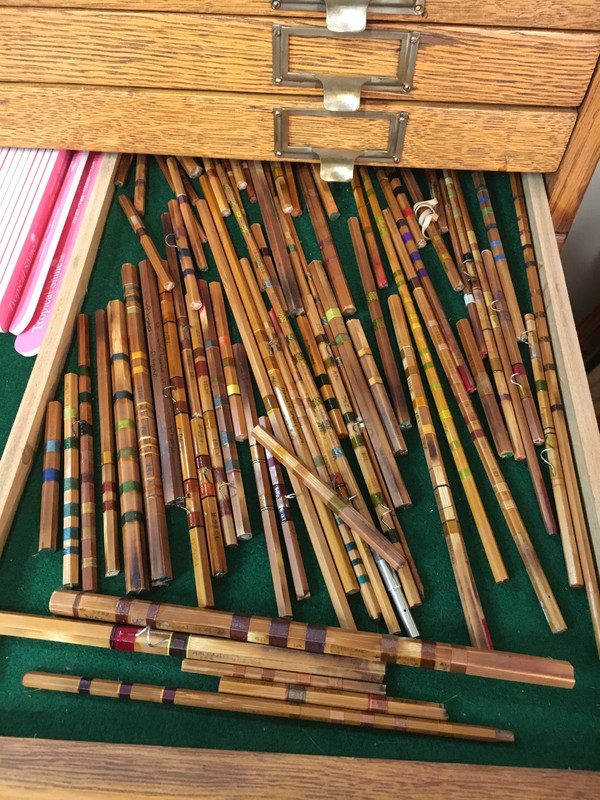