Anyone looking for a LAW vise?

Anyone looking for a LAW vise?

by catskilljohn
This one is going off soon, get it while its hot...and by hot I mean the most overpriced instrument since the space shuttle!

by drlogik
I had a chance to buy one from Lawrence when he was still making them 6 or 7 years ago and passed it up. Kicking myself.... They really are a great vise but for that kind of money no way.

by wiFlyFisher
I have a friend who has a LAW pedestal vise and bought it a few months ago for $1500 and he doesn't tie flies!!

Personally, i think the fly tying vise prices are getting crazy.... I look at the old vises of the Catskill tiers and the quality of flies they tied. I started many years ago with a Thompson B vise that I guess cost me as a young kid under $10. Then moved to a Thompson A vise before Eric got me to buy a Regal vise. For tying Rangeley streamers I recently added the swivel head to my Regal pedestal vise. I still have all 3 vises and they all tie flies to catch trout just fine. I think we tends to forget it is just a tool for helping us attach hair, fur and thread on a hook.

wiFlyFisher wrote: I think we tends to forget it is just a tool for helping us attach hair, fur and thread on a hook.

I agree, but there is also a little "comfort" using what you enjoy too. I did the vise "tour" myself, searching for the one that does it all! I bought a bunch of them, borrowed a few too, and when its all said and done, the simplest one I have is the one I use.

I think when you are buying a vise for 2K, your not looking to tye a bunch of flies with it, your looking to have the most sought after, valuable resale wise, "one that everyone wants but cant afford" vise. Thats cool too, hey if I had 2K to burn, I would be bidding too

by Joe Fox
I don't see how vise prices are going crazy. For $75 and under you can still get a great American made vise. Many people do not want a basic vise and between the materials used and time to build each vise I would say they are priced well for their life spans. Also most American made vises have lifetime warrantees and that greatly increases the long term cost of each vise made, a lot like why rod and reel prices are priced like they are.

The LAW vise is a different story. I have used them and they are very well designed and truly impressive in terms of function and design. They were never a "cheap" vise but even when they were being produced the manufacturer was not making a high margin off them. Now we have a great product with a limited production that is no longer being produced it is not shocking the prices are so high.

wiFlyFisher wrote: ... I started many years ago with a Thompson B vise that I guess cost me as a young kid under $10. Then moved to a Thompson A vise ...

Me too John... actually I started with the vise below, as part of a $4.95 Noll Fly Tying Kit my parents purchased for me one Christmas... I had just turned 13, a millenium... Then I moved to a Thompson B--- like you, which I think cost $8... eventually I laid out something like $30, for the cream of the crop--- that Thompson A which I used for a long time... then I talked myself into a Thompson 360 SLT before breaking a pin central to it, met Tim Didas online--- while he served the country overseas in harm's way--- who supplied me with a replacement pin... and finally purchased the vise I use now, a HMH Standard... both the 360 SLT and HMH are pedestal base models that offer rotation, but not true 360 degree rotation which I don't need...

Along the way I also purchased four "Thompson A knock-off imitations" vises that I used when I taught fly-tying as part of a PTSO after-school program that I volunteered for when I taught middle-school... I still have most of these, as you can see above except for my original A I gave to our oldest son...

by SgtMajUSMC
Quite the walk down fly tying vise memory lane.

While owning a LAW vise doesn't interest me, I've pretty much followed the same path that Ed followed.

That Noll pot metal vise was atrocious! The Sunrise knockoffs of a Xuron and Thompson "A" were a little better, for a little while. My Dad was a machinist so he was able to keep them going until I bought a real Thompson A in the late 70's, with money earned from trappping muskrats.

That started breaking apart, but thanks to a good warranty program it still works fine today-and because of the spare parts I stocked up on, was able to help Ed out a long time ago, which has turned into a great friendship. The vise is quite a looker now, part chrome plated, part black parts, I wouln't trade it for anything, and still tie a few flies on it.

I added HMH in 1995. That vise will outlast me! Fantastic piece of tying equipment.

Then, a Xuron Deluxe model from Larry Kennedy in 2007, as a present to myself at the halfway point of my combat tour in Iraq. I always wanted one, and recalled looking at them in the old fly fishing magazines, but the $39.95 price tag being way too much money...it is also a great vise. Simple, sturdy, and practical.

I'm surprised nobody mentioned tying "in hand." Not my thing, but at the end of the day, you could get by without a vise...if you absolutely had to.

Have a great week, everyone.

by Fontinalis
I was a long time Renzetti fan until last year when I started expereincing numerous issues and some pretty bad customer service to boot. So I went on the vise tour for awhile and finally settled on an HMH for my home and a HMH Spartan for the road. Simple, easy to use, can turn the fly and plenty of room for the hands. Simplicity at it's finest.

Me too John... actually I started with the vise below, as part of a $4.95 Noll Fly Tying Kit my parents purchased for me one Christmas... I had just turned 13, a millenium...

Ed, I had one similar to that. I just don't remember the name, nor the price.... I was 12 at the time. All I remember about it was it didn't work very well at gripping the hook.

by Frequenttyer
I must be regressing. I added this guy to my collection a few weeks ago for the outrageous price of $5.50. Now I just need to find C-F. While it's not going to be my everyday vise, I'm really impressed with the rock solid design and ability to hold hooks down to at least this #20. 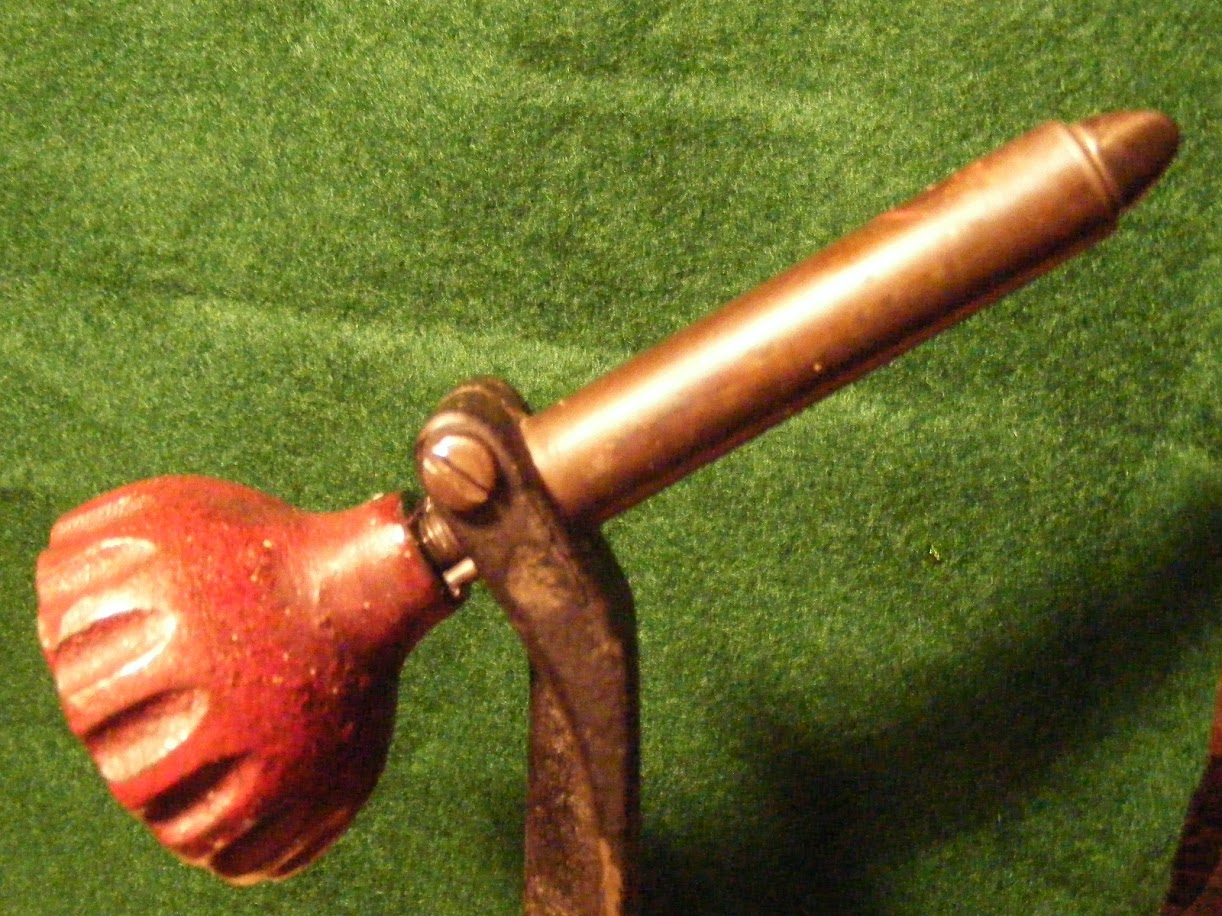