by bearbutt
One day this summer when I was up in Wilmington, I stopped at the Two Fly shop to see Tom Conway. "Tom," I said, "I was looking at your website last night and you have a great stone fly pictured. I'll buy a dozen if you have them, and you should have them because it's an awesome looking pattern." Tom looked perplexed and asked me to show him the fly. So we got behind the counter and pulled up the website on the shop computer, and there was the fly: 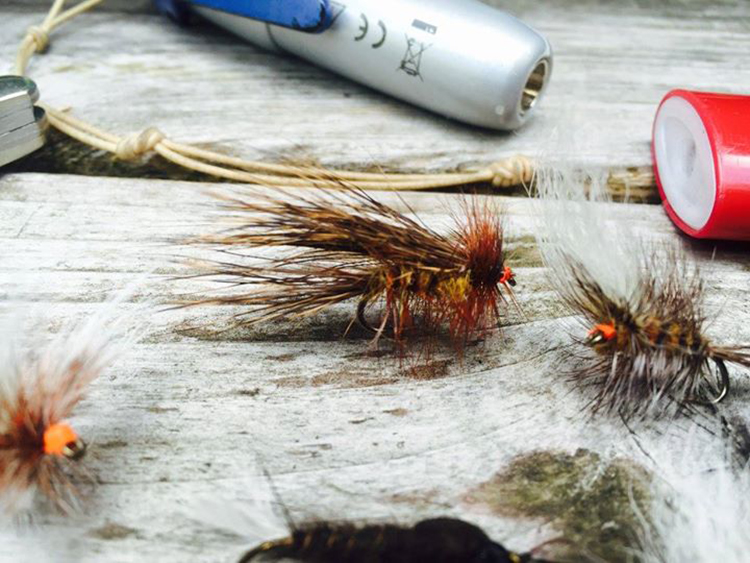 Tom frowned, then smiled and said: "Fran tied it. A while back a customer came into the shop with a few of Fran's flies and I took some pictures."

We went over the fly together--everything about it is Frannish: hairy, sloppy, and perfectly proportioned. The profile was nice and low--much better than the stimulators I usually tied for the Ausable--. We couldn't figure out the hair--woodchuck? You won't find a little 2" square piece of fly shop woodchuck with the right hair--you'd need a full skin--with golden tan tips instead of white. If it is woodchuck.

But damn--what a nice tie, and Fran never wrote about it in any of his books. It was one of his patterns he took with him to the grave--.

by Eperous
Great story... thanks for posting...

by Mantis
More than a year and a half ago I got a call from Jan Betters (now living in Florida). She was putting together a book of Fran's patterns, many, she said that had never been published. She sent me a rough bunch of pages of recipes, some pics and I talked buddy Dave Brandt into doing it. Dave got Dan Thomas to split up the 50 patterns and although it took them a year to get it done and down to her, they finally did it. I'll have to ask Dave and Danny if either remembers anything like this Stonefly pattern shown here.
I had glanced thru some of the pages quickly just enough to know I wouldn't be doing it. Other than a couple dozen Klinkhamers a year, I rarely tie fishing flies. Dave only turns on his computer to delete hundreds of emails every couple weeks as he never looks at emails. If I have something I want him to see I send it to his wife, Barb.

Who knows if it will ever get published, but if Dave still has a copy (he must have copied it to give Danny, then at least I could see if this pattern was included. Fran was hand writing notes for his autobiography and had asked me to write the foreword for it, which I did, but he never put it together. I have asked Jan several times to mail me his notes and I would write it for her..didn't want anything for it...just as a favor for an old friend. If I hear anything, or can find out anything, I will let everyome know. As ever, Bob

by bearbutt
Bob, now that's something--if that book has some previously unpublished patterns, and all those ties by Dave and Dan, and Fran's notes--it would make a really fine publication. Maybe call Jan and ask her if there's any way we can help? I'm sure we have enough talent and resources here among the SGM misfits to bring the book to print....

by bearbutt
After talking with some others about the pattern, it still seems to be unclear what sort of hair Fran used. One friend suggested Badger. Another tier I respect a lot suggested key, or coastal, deer hair. I am still partial to woodchuck. Here's another picture of the flies that Tom's customer had--there's another stone fly on the far right: 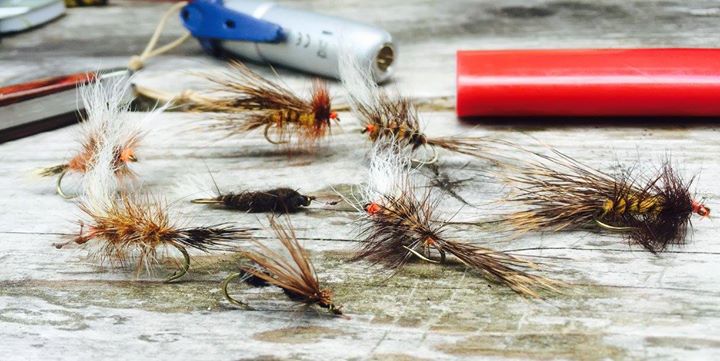 If you look at the Bombers in the photo, two of them have similar hair, that is clearly woodchuck guard hair. So this got me going over a woodchuck skin I have: 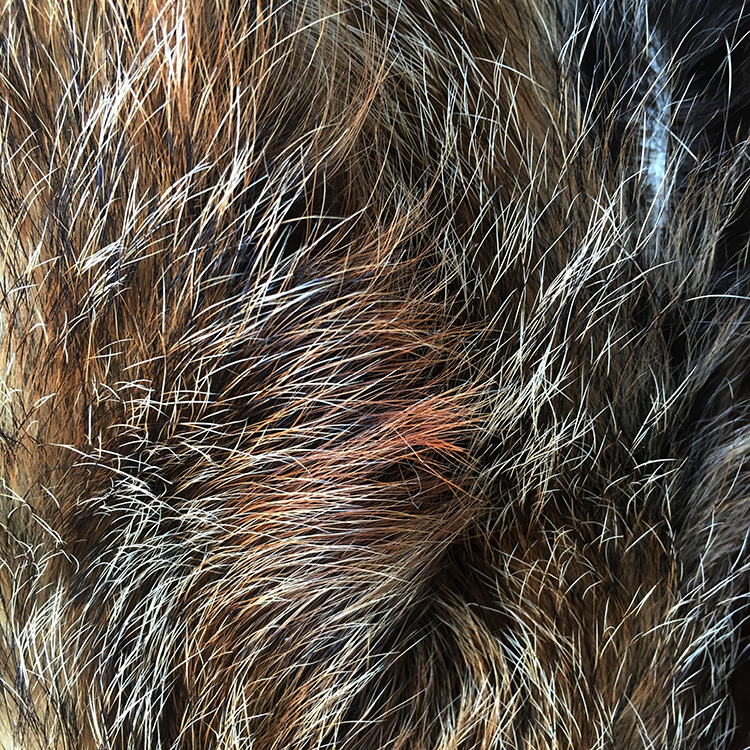 I also compared it to a Marmot--but while the Marmot guard hairs are a good match for color, they are shorter than a woodchuck--about 1 inch long. The hair in Fran's stone flies seems around 1 1/2-2" long. I can't imagine him using something so exotic as Marmot anyhow. It's hard tell for sure the hair length without knowing the hook sizes here--I am guessing based on the lighter, a Mustad 9671 in size 10.

Any thoughts? Until Ed--whoops, I mean Bill--can find the dressing for us, we'll have to use our best forensic guesswork.

by squish67
Having watched Fran tie dozens of different flies. If there was woodchuck on the bench he used it. Just saying.

by catskilljohn
Like squish said, I would think the most common and easiest to acquire would be the likely guess.
I didn't know Fran, never even saw him in fact, but if there is one thing that seemed consistent with him, it was using what he had the most of and what he could get in bulk, the most cost effectively.

by Eperous
As a young aspiring flyfisher, and upper level college student getting ready to conquer the world back in the late 60s, 1970--- what happened?

--- I stopped at Fran's shop a few times while fishing the West Branch of the Ausable... I acquired several of his flies--- which hang in a shadow box over our fire place--- and several of his books, which he autographed for me...

My favorite Betters' book is Fran Betters' Fly Fishing --- Fly Tying and Pattern Guide with a 1986 copywrite date... back then, before he wrote about his Bomber and other patterns like this stonefly, he seemed to favor woodchuck...

by Bamboo&Brookies
It could be dyed woodchuck, which would darken the natural cream colored tips.

Great looking dressing regardless. Looks very buggy, as you would expect from Fran.

Thanks for posting... the Dave Brandt project sounds interesting, I would like to find a copy if it makes it into print.

Bamboo&Brookies wrote: ↑
Sat Aug 12, 2017 11:37 am
It could be dyed woodchuck, which would darken the natural cream colored tips.

It could be, indeed. I'm really on the fence about this. There's a lot of variation on the tipping of woodchucks across a pelt--especially the tail (which you don't see often in fly shops). Some tippings are white; some cream; some golden tan. Then of course there's coastal deer and elk--both viable possibilities: 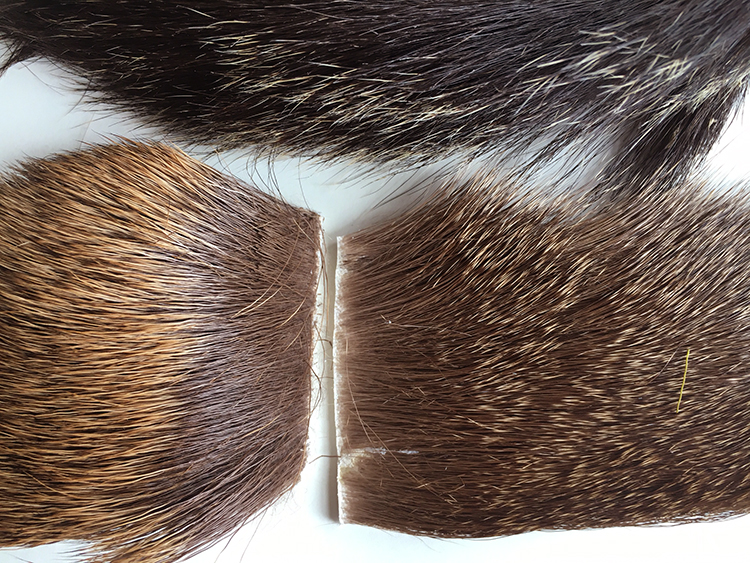 The chuck tail is on top; yearling elk on the left; coastal deer hair on the right.

I'm a bit too swamped with work now to settle into the dilemma at the vise--I hope to do this before too long as I have all the materials I want to work with, pending one example that's in the mail.

Bob, any update on the dressing or book for us?