tie2fish wrote:My father always told me, "If you're going to do something, do it right."

My father said the same thing!--believe me, I've done things wrong enough times that the memory is painful--like tying the tinsel clockwise about 35 times before I realized I was doing it....wrong.

As for tying without a vise--well, I tie with a vice, I like to drink when I tie--but I don't suppose that counts? I think the hardest part of tying these without a vise would be the bodies--wrapping the thread, then wrangling with the floss (so it doesn't frizzle) and the tinsel (so it doesn't spring loose). Silk floss hates to be handled and frizzles easily; plate metal tinsel is like a spring--one slip and the whole shank full of wraps is loose. It makes me wonder just how she did her half hitches with her passive hand full? Assembling the bodies without a vise should not be hard--it isn't, I've tried that--but the thread/floss/tinsel part is a real challenge.

When art is discussed, people want to know 'how' it is made, but in the end they don't seem to care much once they know the answer. Think of Rodin, for example, or Warhol--. On the other hand, with someone like Richard Serra's work, the process of making the work can be infinitely more interesting than the final product.

Finally got set up here in New Buffalo—fire in the fireplace, but no snow on the ground. ☹ 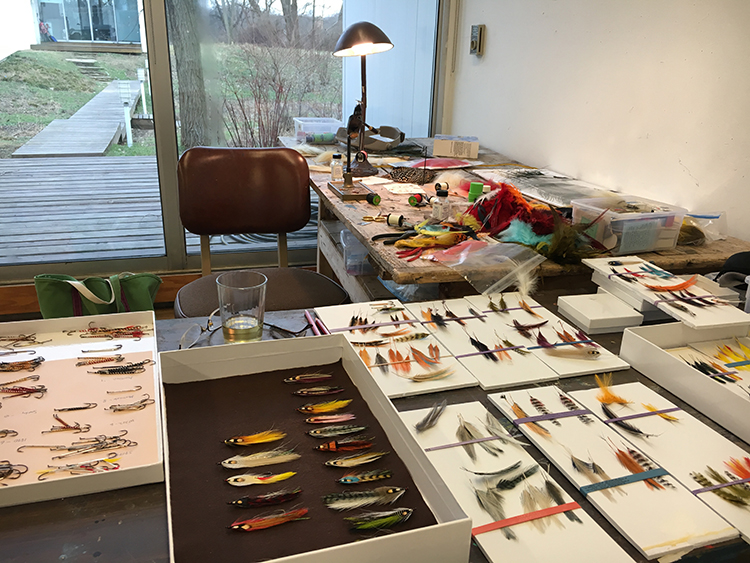 The flies are coming well, though—the hard part with Stevens, like the hard part with any fly, is proportion—getting everything balanced just right. Every wingset is a little different, but the rewards are worth it: 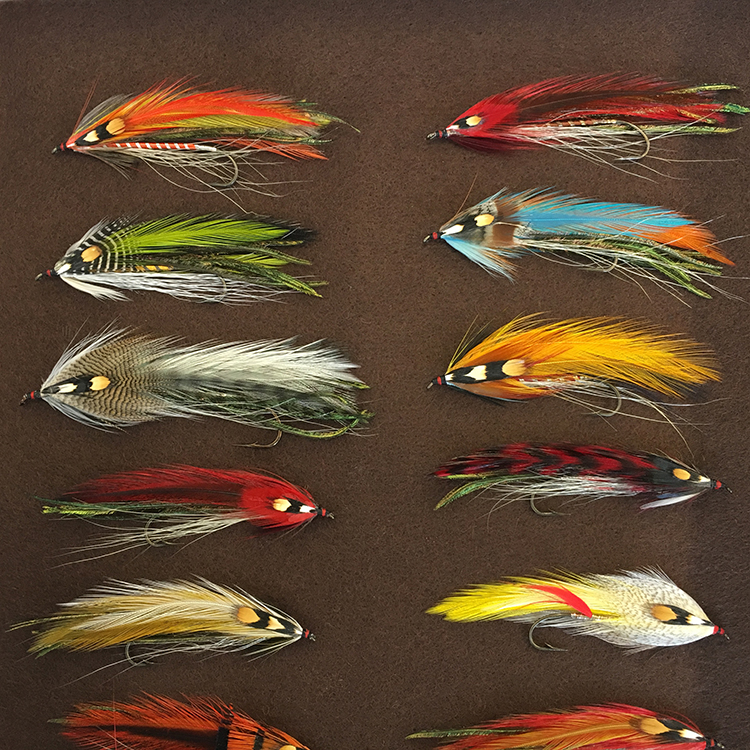 Like any trip away from the home base, I’m finding myself missing a few things I need to complete some flies: Where’s the duck? The red grizzly? I don’t think any of us have ever gone one a trip and didn’t miss something. I once went all the way to Middle Dam and found I was missing my wading boots—oops.

Finally finished, more or less. Goofed a few times, but I can't complain really. Head color sequences, for example. Made a nice mess too: 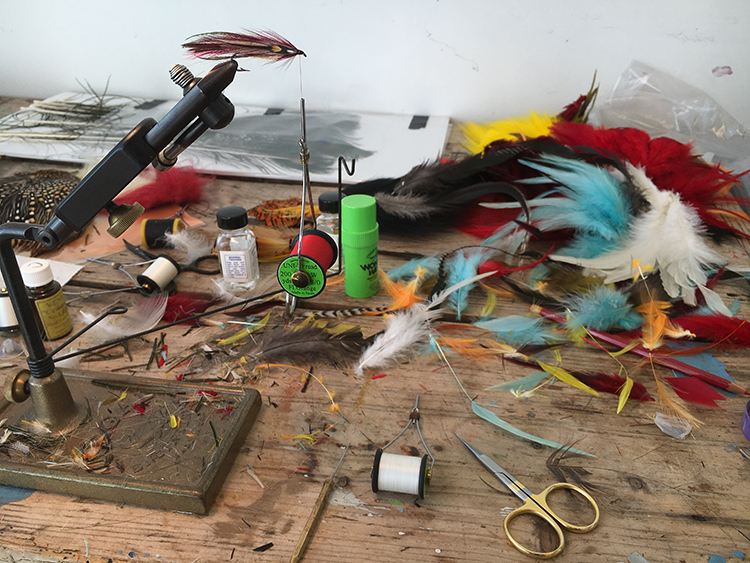 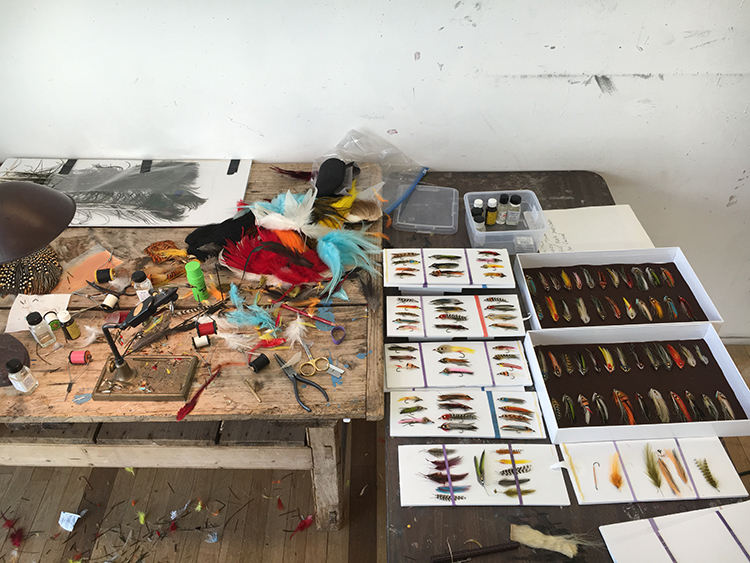 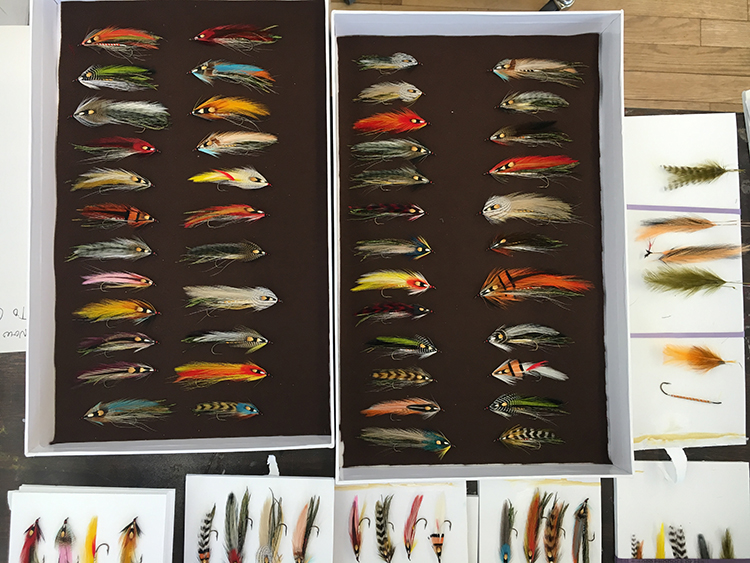 A friend said to me that I am not right in the head, and I think maybe he's correct. Sometimes you do these things just to prove to yourself that you can. I still need to shellac and vanish the heads, and finish off a few flies left undone because of a need for materials I did not have in New Buffalo--then it's on to the next project--those confounded Rheads, I guess.

One thing this project did was bring up to me what I think is the nicest sound in fly tying: the light 'click' you hear (and feel) when plate tinsel falls into place on the trip from the bend to the eye of the hook. It's a GREAT sound--. Runner up nice sound: "Honey, you are working so hard on those flies, can I get you a beer"?

bb - i could go on, and on here, but I won't: outstanding work on your part. A most insightful undertaking on your part...
Well Done !
“Time to go fishing”
Top

Wow. Very very impressive. What a great project. Congratulations. The flies look to have turned out beautiful.

You are to be congratulated! Well done! Can't wait to see the Rhead flies!

Thanks for the kind words, guys--and also for the help you've provided in so many different ways.

That makes two of us!--I have no idea what to expect with the Rheads--we have no dressings to go by, as he was like Hewitt in that he was selling finished flies--so he kept his cards close to his chest. But I guess that's part of the fun?

So--while trying to put a wrap on the ties, I ran into a problem finishing off the heads: what fixative/lacquer/cement to use?

Carrie reputedly used shellac as a color fixative, followed by clear lacquer, according to the Hilyards. The shellac worked to keep the red band looking red--because just using laquer would darken the thread. And shellac alone is not waterproof--so it needs the protection of lacquer or some other sealant.

Of course, given that times have changed--and lacquer formulas have changed to meet new VOC standards--nothing is simple.

So I tried a few experiments with the stuff I have lying around: 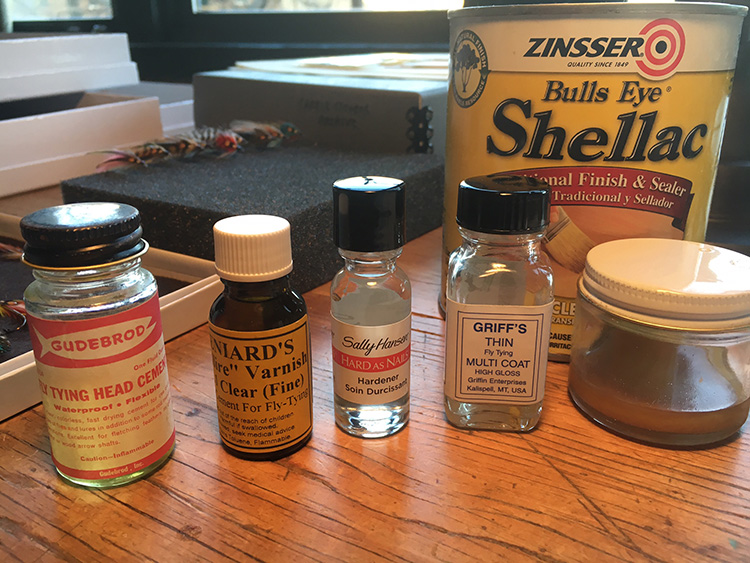 My favorite head cement, Cellire, performed worst in this task--. It's great on all-black heads, but saturated the red bands a bit too much.

The Gudebrod surprised me--shiny, vibrant color band too. Smells awful when the cap is off--not sure how to date my bottle, probably the 70s? It's a toxic waste site in a jar.

The Shellac and lacquer was nice also--but not much better than Sally Hansen. Could be my shellac is old (poured from can into jar in right in photo).

I'm open to other suggestions/ideas? I might try some old "Rodspar" varnish I have. Sorry I don't have good photos showing the differences--they are nuanced and subtle differences, and hard to show without a good macro photography setup.

Also--VERY IMPORTANT--when using those skinny bottles that head cements come in, there are two things you might want to do:

1) Pour off into another jar just so much as you want to use
2) Put the skinny jar in a bigger more stable jar so it cannot tip over.

The point is to never have in the jar more head cement than you want to spill on the kitchen table.