bb
again, beautiful work - masterful.
Another option would be to buy shellac flakes, and make your own.....I do, and it is quite suitable as the base, preserving the color same as the old tyers. Top coat is usually Sally Hansen's, or Superglue.

On another note, for the Rhead project(or any other for that matter) let me know if you need any special old materials.....I have quite a stockpile.
dana
“Time to go fishing”
Top

I've been organizing materials to remake the Carrlie Stevens archive project that was stolen two years ago--that story can be found here: viewtopic.php?f=10&t=14219

The starting point is always hooks, it seems. I originally tied on Martinek hooks, and some Allcock 1810s, but have expanded my supply to include some Mustad 3907b hooks in size 6 and 2. Here's a comparison between the Allcocks (on top) and the 3907Bs (on the bottom):

The Mustads have heavier gauge wire and a rather darker patina, which I like a lot: 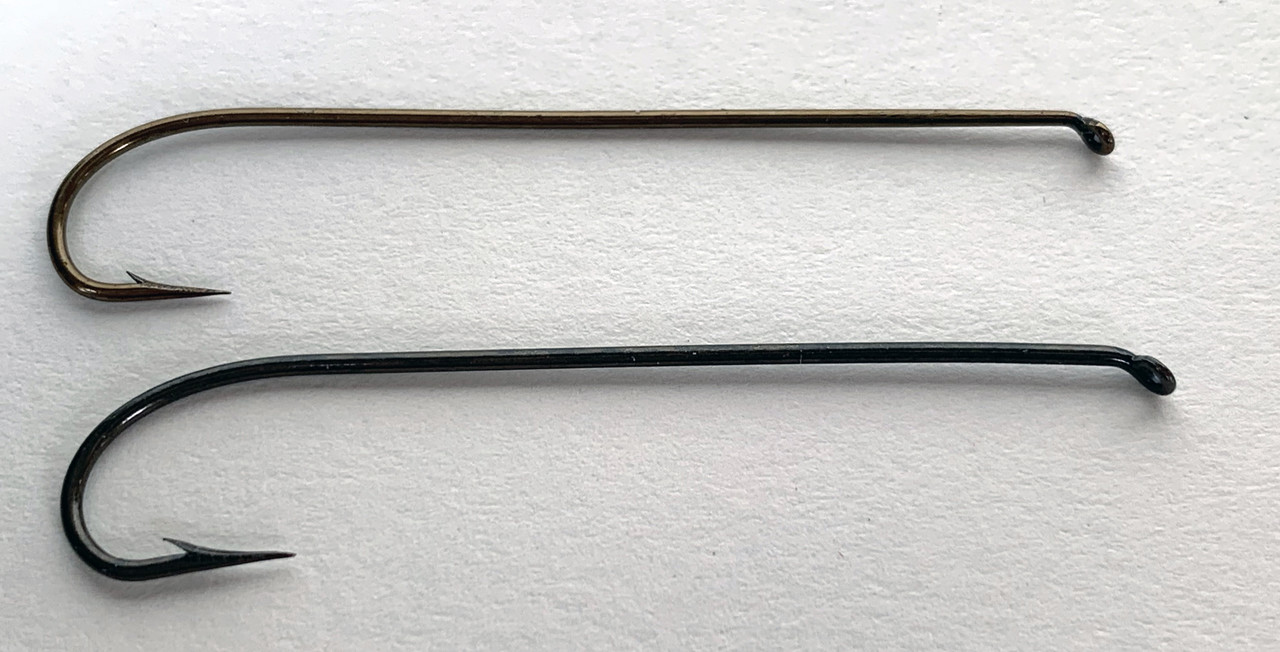 The Mustad 3907B also has a more Limericky bend; and the Allcock (like most Allcocks) comes with a bigger barb: 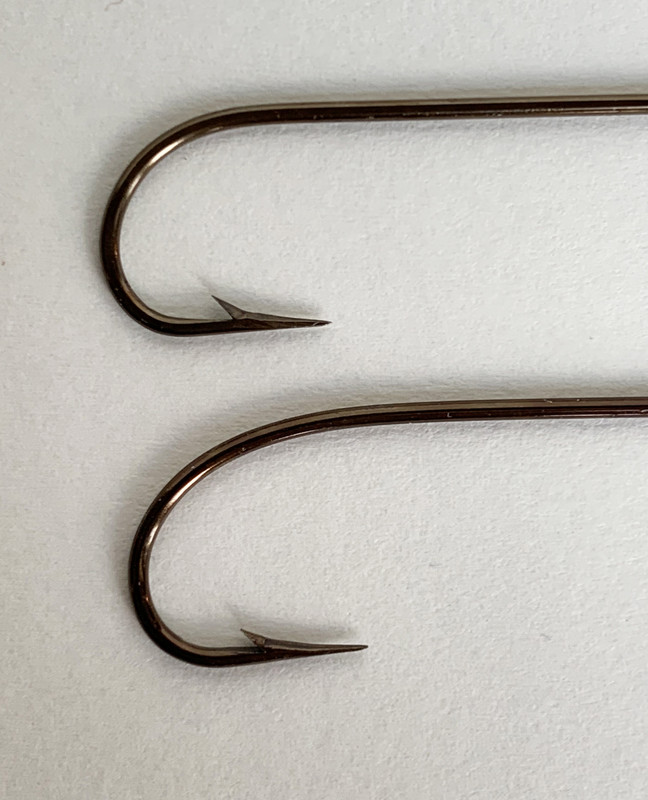 As is common with Mustads, they're also more inconsistent: the eyes aren't closed so tightly and neatly as the Allcocks: 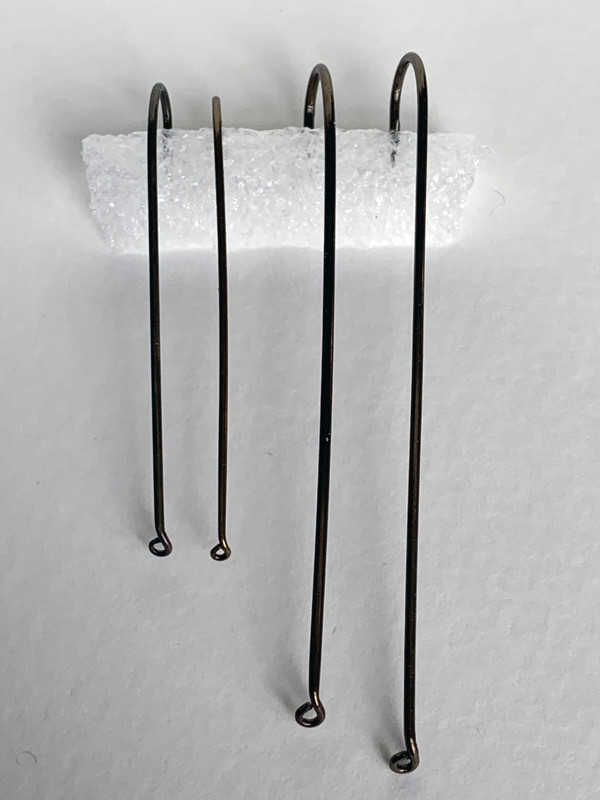 Some of the 3907Bs were bent pretty badly. I'm not sure how this happened. Anyone have ideas? 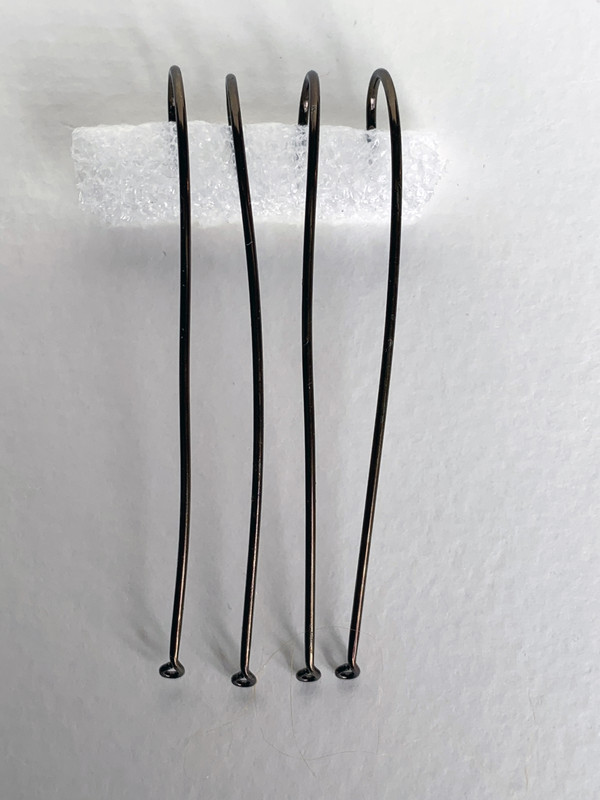 I'll post updates on the project as it redevelops. It feels good to get back into the thick of things.
Top


Agreed!--And as well, the entire process of learning to tie them is an exercise in fly tying forensics--especially as Stevens left few notes about her process.

One of the most satisfying and beautiful aspects of tying Stevens' streamers is making tinsel bodies-- where the tinsel is wrapped along the length of an 8x hook--which can be two inches or more long.

The quality of tinsels vary a lot: the most prized tinsels are French metal tinsels, made decades ago. Tinsel was originally made from strands of extruded silver--it was invented in Nuremberg in the early 17th century--and over the years, the process evolved. Traditional "lametta" tinsels involved wrapping metal thread around a thread core--oval tinsels are like this, as well as metallic embroidery threads. Flat tying tinsels have a solid copper core, which is plated with gold or silver alloys, and then sometimes laquered to keep it from tarnishing. Some tinsels are also embossed to provides a more reflective tactile surface; some are colored an array of blues, pinks, greens, and violet. The variety of tinsels is astonishing, though today their manufacture is a lost art. Modern tinsels are primarily made from PVC or mylar, and lack the weight, feel, and substance of traditional metal tinsels, at least to me. 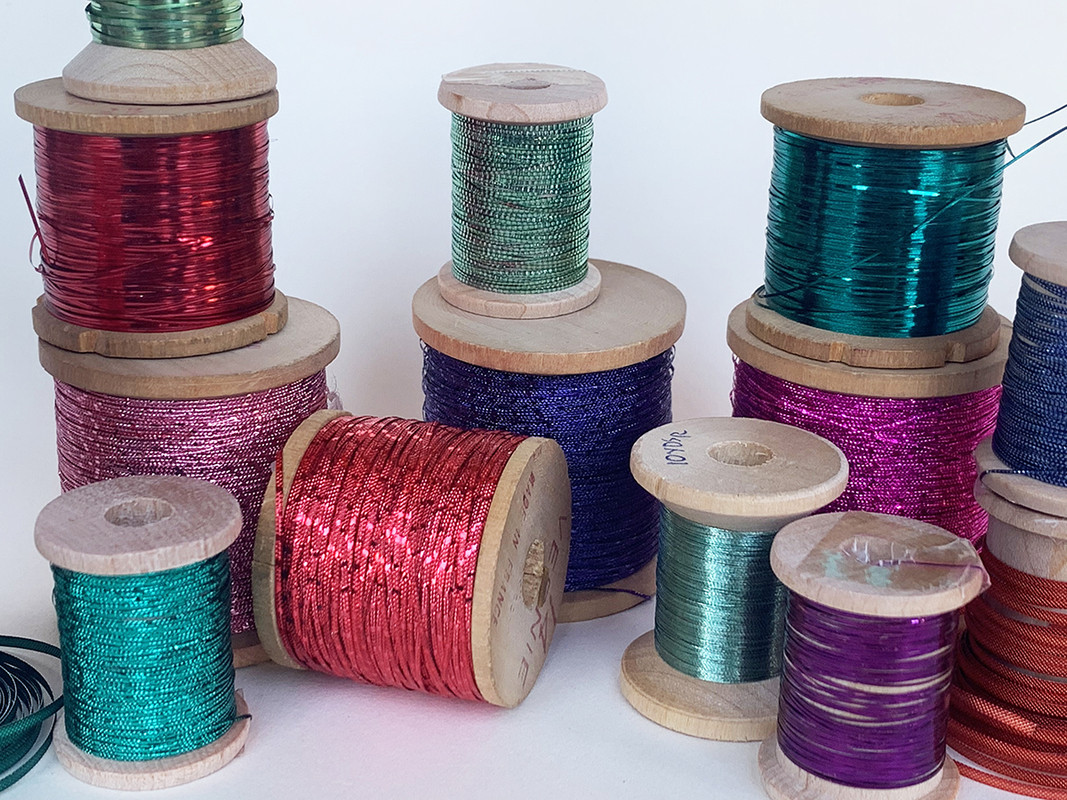 French tinsels from the 1950s and 1960s that were sold by Herters are surprisingly good. They were sold under the very French sounding name "Henri Verdura"--and can often be found today on eBay and Etsy, either on cards or spools weighing up to three or four ounces. I never quite figured out the sizing/coding. The Herter's catalogue lists three sizes of flat metal tinsel:

Oval tinsels have a different numbering system--and would require another post.

It takes a while to get the hang of wrapping a long hook with metal tinsel. I don't know if it's really necessary or not, but I like to wrap a bed of silk thread under the tinsel before laying down the tinsel. A size 6 8x hook takes 125 turns from about a quarter of an inch behind the eye just short of the bend, and another 125 turns back to the eye: a total of 250 turns. A size 4 hook takes 370 turns; a size 2 takes 480.  It depends also on the thread you are using, I like Uni 8/0 and 6/0 because it lays flat, and minimizes twisting issues that come when wrapping a long hook. 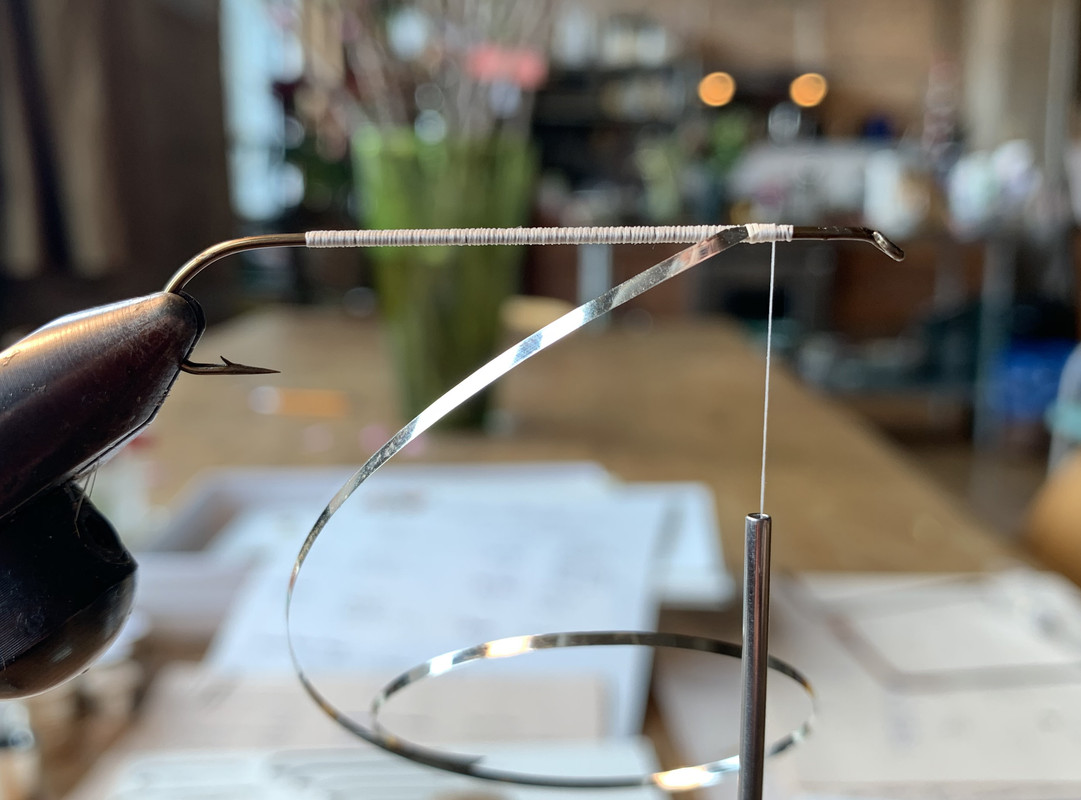 Laying the tinsel, I follow Helen Shaw's routine wrapping the hook from eye to bend and back again. The tinsel is first cut at a 45 degree angle and tied in a quarter inch behind the eye. Then, wrapping counterclockwise, and keeping the tinsel tight, it is brought towards the bend. The trick is to keep the edges of each wrap abutting each other--no overlaps--so the tinsel feels smooth. At the bend is the trickiest part of the whole process: reversing direction, and keeping the transition smooth. 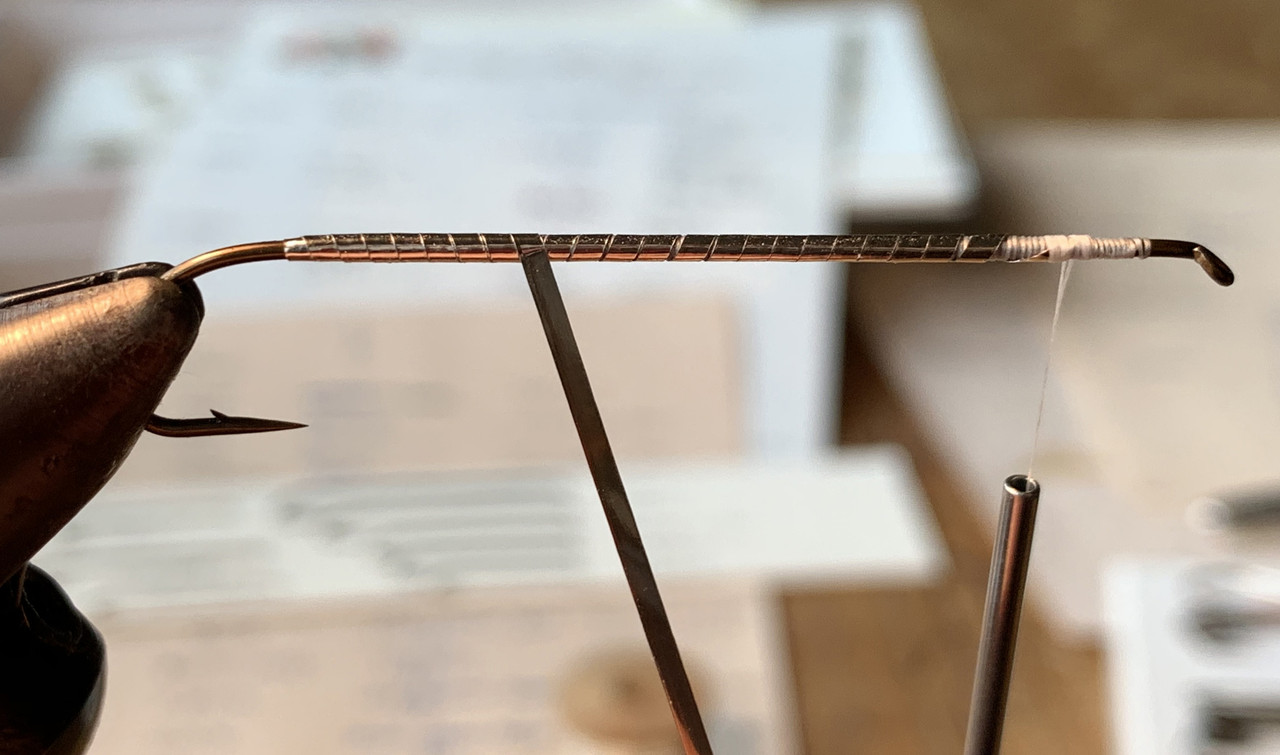 As you wrap back towards the eyes, the tinsel will make a little clicking sound as one wrap bumps against another wrap: you can feel it in your fingertips. Click. Click. Click. 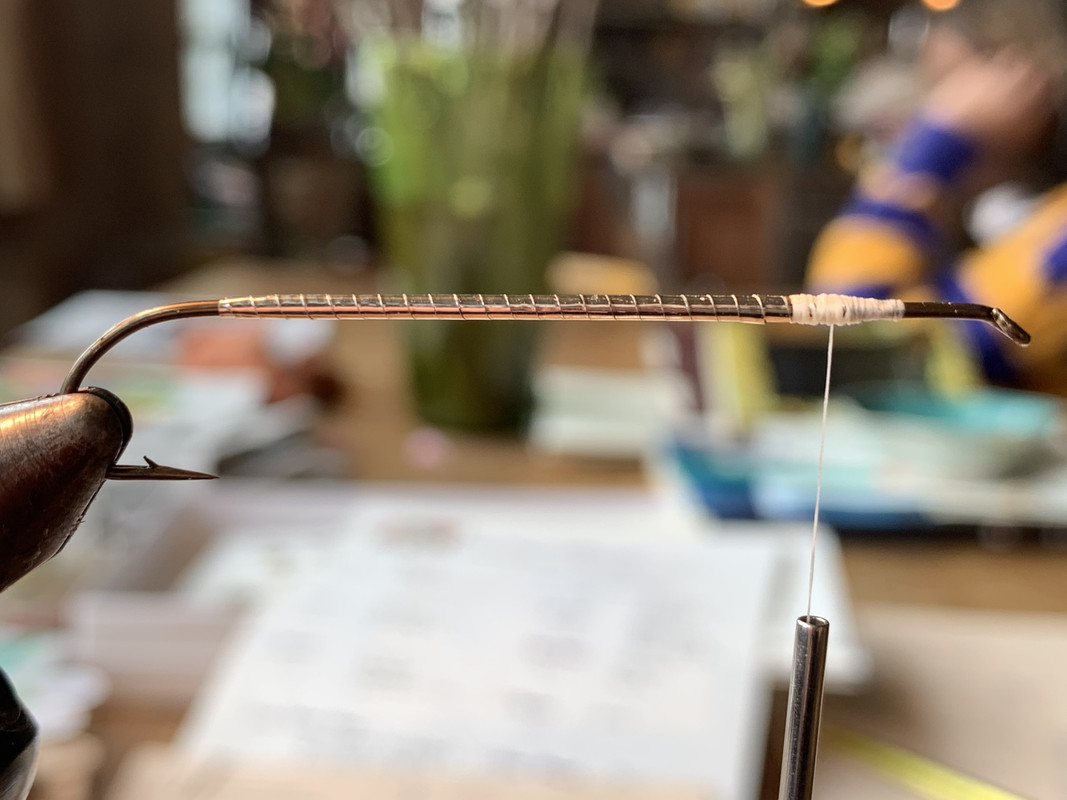 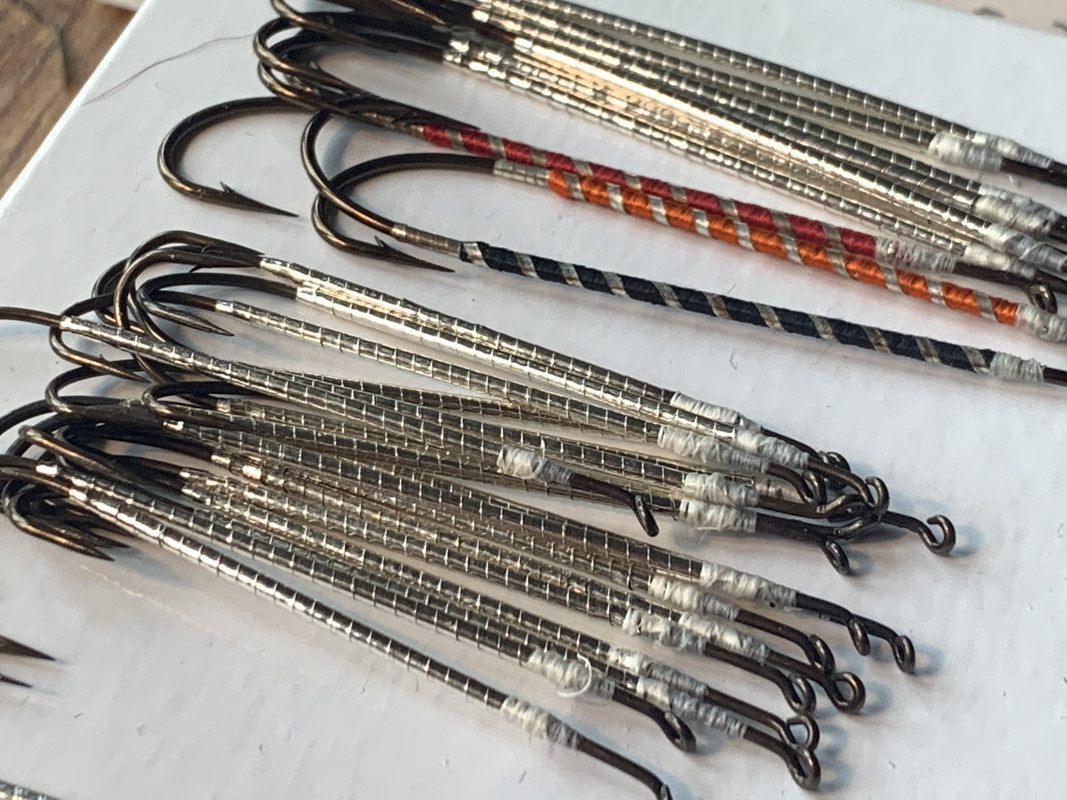 Just my opinion, but I believe that Lagartun flat (and oval!) tinsel is the equal of any tinsel ever made. And I go through a lot of tinsel! I have no financial interest in the company, although (full disclosure) I was on their ProStaff for a couple years.
bb, it's interesting that you wrap tinsel up and down the hookshank. You must go through gobs of tinsel I just tie in at the butt and run it up to the head. Your hook, your rules! Nice tinseling, at any rate!
Gary
http://www.theriverscourse.blogspot.com
Top

Thanks, Gary. I agree Lagartun tinsel is great stuff--and also their silk floss. I think there are two differences between Lagartun and some of the older Vernie tinsels:

1) Lagartun feels slightly thinner--though I need to confirm this with a micrometer. For some tying applications this is an advantage, as you can pull it tighter, which I like when ribbing floss bodies--it doesn't sit on top of the floss so much as in it. So it's nice having two slightly different resources here.

2) I find the Lagartun is slightly more satin than some of the older Vernie tinsels. The varnish on the older tinsels is however inconsistent, and there's some tarnish here and there--which I sort of like. LOL. It goes well with rusted vintage hooks!

Here's a pic, though it's really hard to show the variation in the varnish with the lighting setup I have: 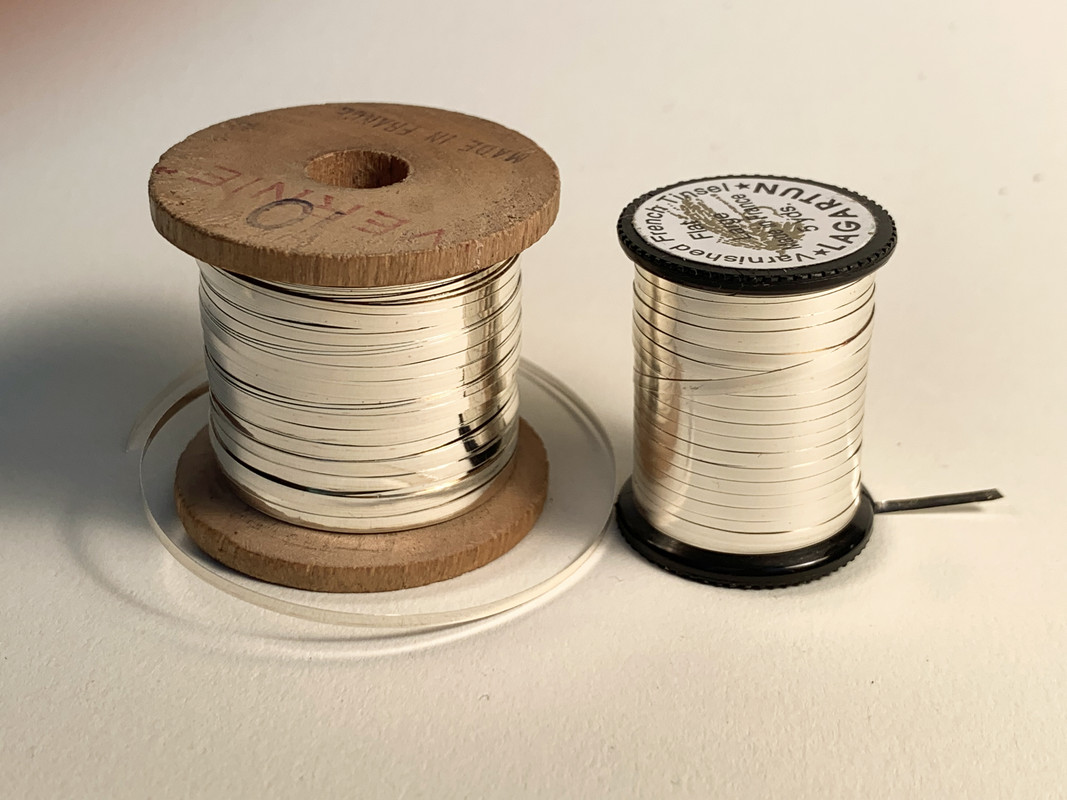 I sometimes tie my tinsel in a single direction like you do, especially when tying trout flies (like Atherton's variants, which use tinsel) and Muddler Minnows--but for Stevens streamers, I'm going all out, and laying it on thick, lol--.

Besides the look another layer of tinsel adds weight to the fly. Walt Dette used to use three layers and didn't worry about gaps between the turns because he said the three layers will cover almost all the gaps and add some weight. Like Gary said, it is a personal choice.


I am not 100% certain, but she used one layer of tinsel, probably because she tied in hand...
Top

Tinsel hooksets are done; time to turn to the floss hooksets now.

One of the biggest challenges with fly tying flosses is finding the right density/thickness, and the right color. For Carrie Stevens streamers, orange, red and black are used most frequently. Orange is the trickiest; it can range from a deep Navel orange sort of orange to a golden orange to a pale yellowish orange. Reds also vary a lot, from an intense scarlet red to orange-tinted red to pinkish red. During this lockdown period, when there's seemingly no rush to go anywhere or do anything, there's a luxury to linger over a problem or a situation like this: to examine with scrutiny the materials that are part of our practice--either as fly tiers or as artists more generally.

Herter's Superla and Danville's Rayon are four-strand flosses; the others are all one-strand, varying in both strength and thickness--generally 600-900 denier. 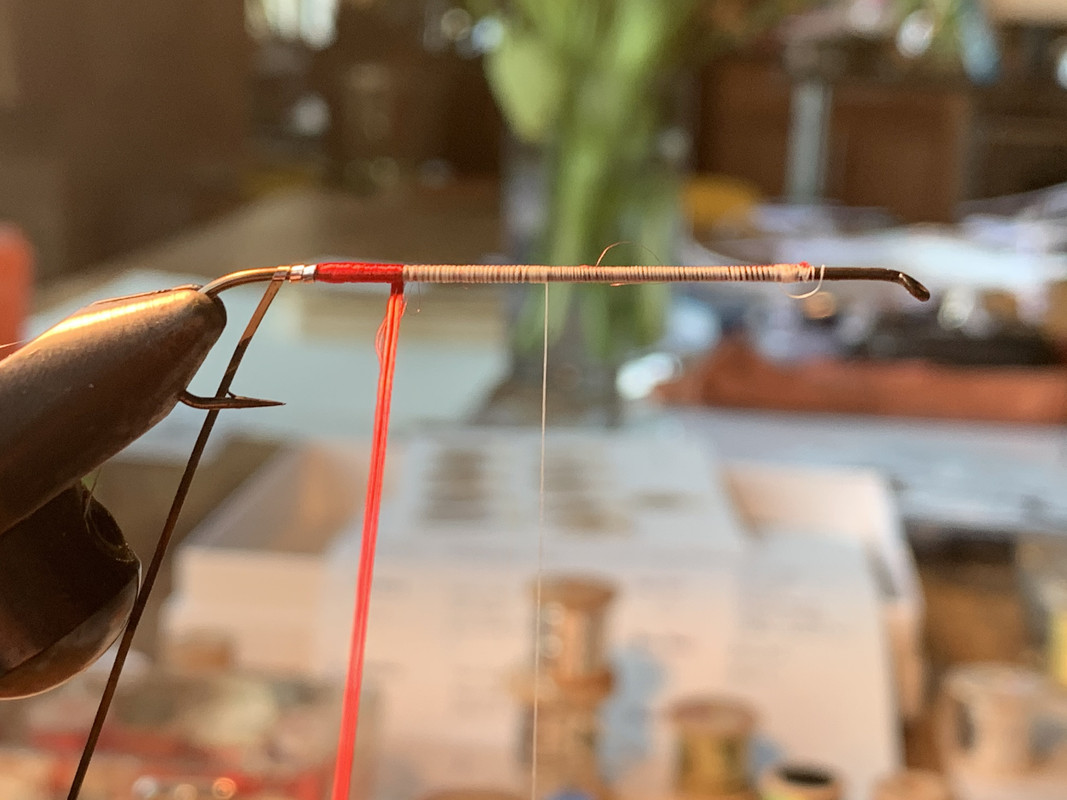 For wrapping size 2/4/6 8x hooks, I find using two strands of Superla or Danville's Rayon lays down very flat, the strands shingled as I wrap. I sometimes double two strands of UNI to get the same effect. I wrap by hand; using a bobbin invites floss twist. The dilemma in using a vintage silk is that its viability depends greatly on how it was stored; often the silk will break down, and the strands frazzle into fuzzy uselessness. 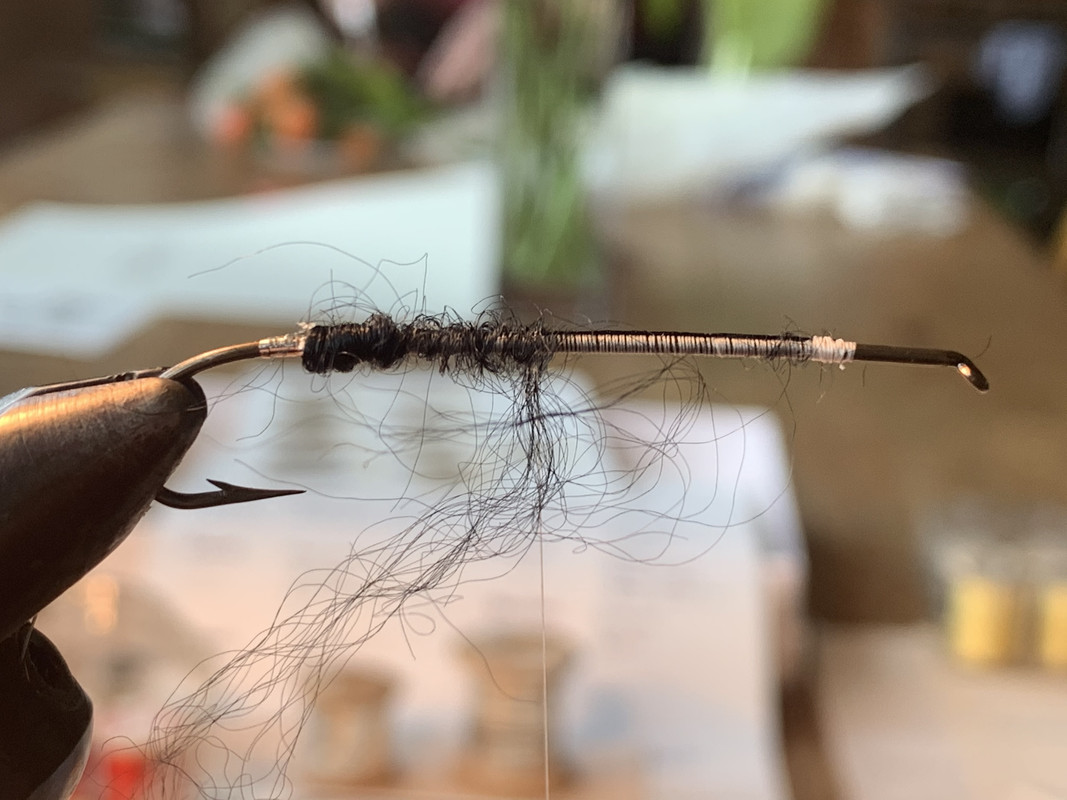 For larger hooks (2s, and sometimes 10x long size 1 hooks) I also like the heavier single strand flosses: Rice's, Lagartun, and Pearsall's stout. I don't like Pearsall's Marabou much, in part because the strands are braided--but in some situations it works exceptionally well.

I haven't experimented with the various Japanese silks preferred by tiers of steelhead and salmon flies--.

Does the difference between silk and Rayon matter? Visually, at least in the case of tying Stevens-style streamers, I don't think one can see the difference between them. Acetates were developed in the 19th century as a substitute for silk, using cellulose, so there has over a century to perfect the qualities of flosses. Stevens herself tied with silk, which she obtained (along with her favorite Allcock 1810 hooks and hackle) from George Fletcher's fly shop in nearby Rangeley. 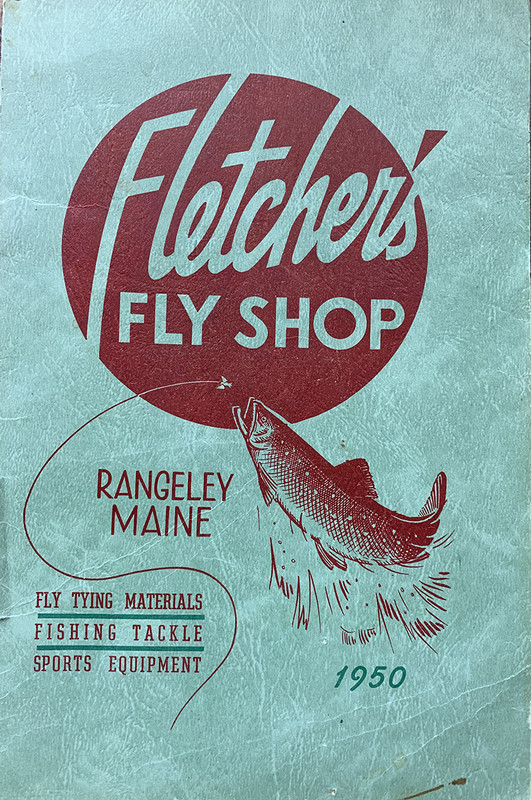 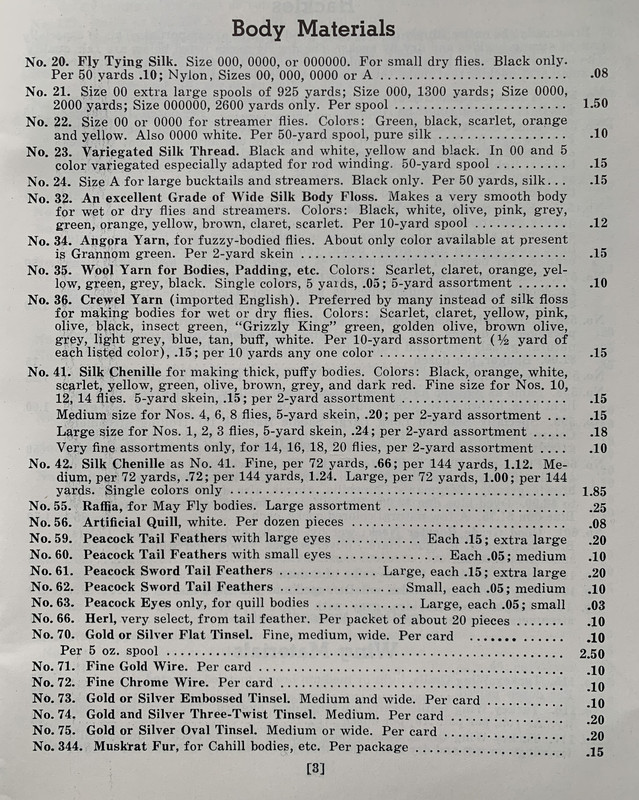 In the end, the process of wrapping a floss-and-tinsel body for streamers is slow and deliberate. Everyone has their own way of doing it. Mine's pretty uncomplicated: The thread goes first, wrapped the length of the hook; then the tinsel is tied in near the bend; then the floss is tied in, and the thread is wrapped back to the eye, followed by the floss, and, finally, the tinsel. If all goes well, it will be one smooth operation, the tinsel wraps evenly spaced. Sometimes it doesn't quite go as well as you plan, and instead of a neatly wrapped hook you have a fuzzy little mess, lol. 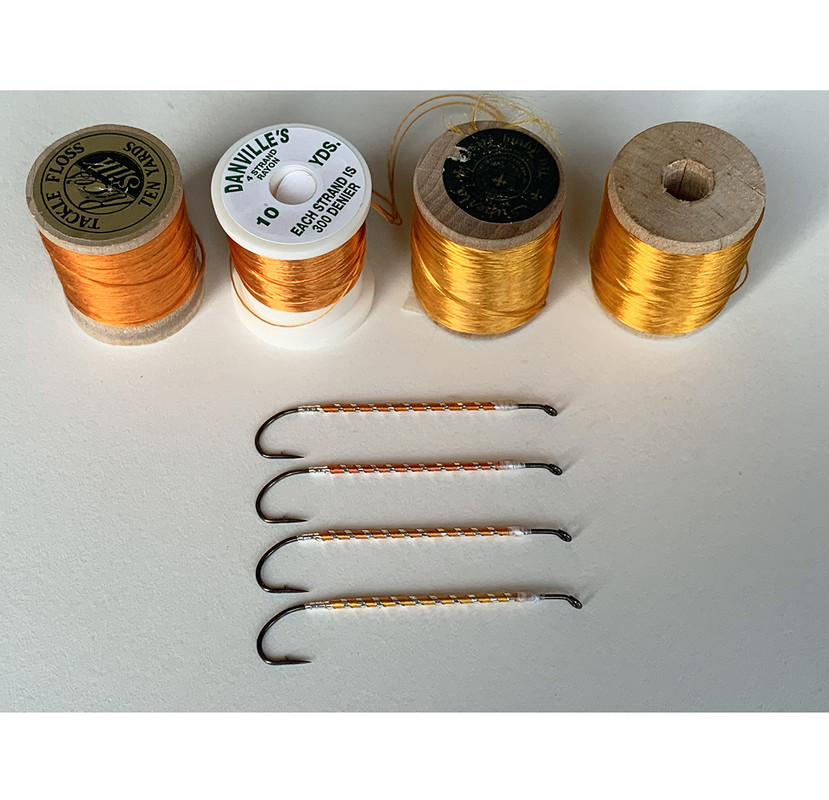 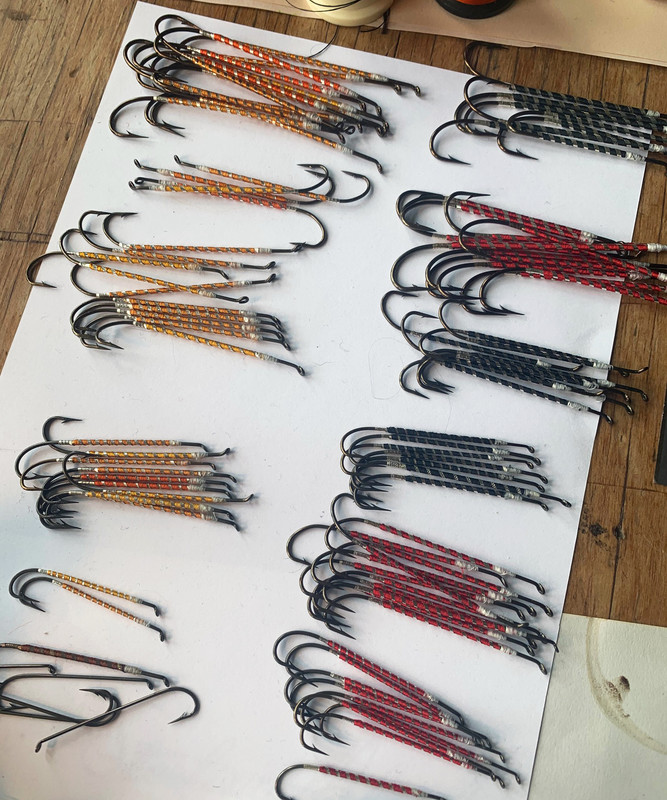 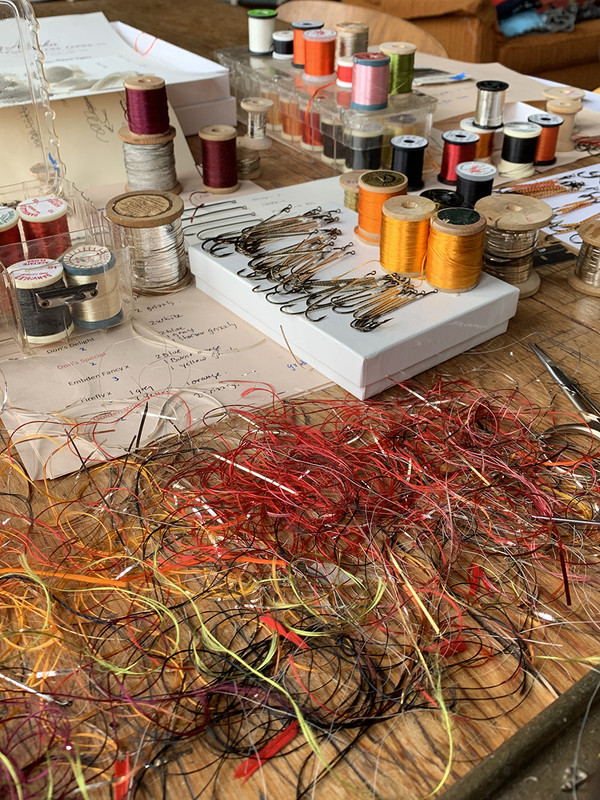 Nicely done. I've enjoyed playing with flosses myself, and for Stevens-style flies, have settled on Uni in a bobbin. Twist is easily handle by little spins of the bobbin. I take my thread off the hook, and start the floss wraps adjacent to the eye the same way you would start thread. But I keep the tag end of the floss in my left hand as i run down the hook to the butt, cut of the tag end there, and run the floss back up to the head and tie off with the re-started thread. Your mileage may vary!
Gary
Here was my little dissertation on floss: https://theriverscourse.blogspot.com/20 ... avors.html
http://www.theriverscourse.blogspot.com
Top

LOL, thanks, Gary!--there's good stuff here, I wish I saw this before I started my own floss studies! I'll have to try your up-and-and-down the shank routine, it seems so obvious the way you describe it--especially when using a single strand floss like UNI--which is exceptionally well made, as flosses go.

Snowing here in Chicago this morning--a good day for tying!