From Halford's early dries to the Catskill dry and everything else that floats on the surface.
Post Reply
24 posts

While I'm on the topic of quill-bodied flies with grey wingsets, I thought I'd say something about G.E.M. Skues and his Orange Quill dry fly. As some of you know, Skues wrote essays about both tying and angling (especially about fishing nymphs upstream) in the Journal of the Fly Fisher's Cub of London; between 1910 and 1939 he published four books. He also corresponded regularly with Theodore Gordon. His visage is unforgettable, and one of the most gnarly in angling history: 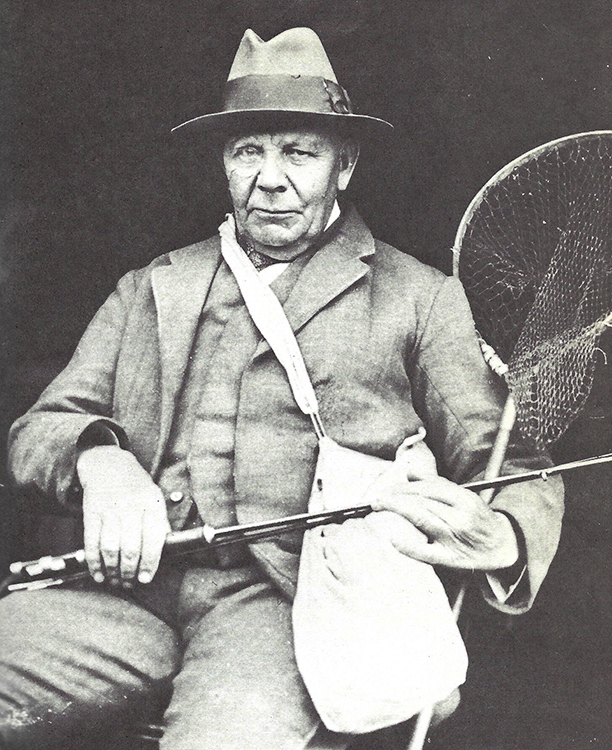 Skues had huge hands, one eye, a permanent scowl, and a very particular sense of humor. He also had some tying secrets.

One of those secrets is the Orange Quill. He describes it--somewhat vaguely--in his writings, but among his 82 published fly dressings, it cannot be found. Not until Skues died, when his letters were collected and published, did secrets about the pattern come forth.

The Orange Quill is tied to represent the Blue Wing Olive dun. This seems illogical--we want to think Olives have olive bodies, not orange bodies. Skues could not explain why it worked so well, only that it did. At dusk, and only at dusk. While he developed the pattern in 1894, it was not until 1931 in an article in the Fly-Fishers’ Club Journal that he discussed the Orange Quill in relation to Halford's Red Quill--which he insisted was different than his fly, more of a brownish red. In the last year of his life at the age of 91, in a letter to A.E.N. Jordan, he described the particulars of the dressing: "It is winged with starling," he wrote, "and the color of the body is hot orange. The body is made of condor quill: it has the usual hackle and whisk" (Letters, p. 38).

There is no published photograph of an Orange Quill tied by Skues. At least as far as I know.

The closest thing I have seen is a version of the fly tied by Thomas Clegg in 1984, in a group of Skues patterns he tied. The Orange Quill is on the far left:

Here's a close-up, of sorts: 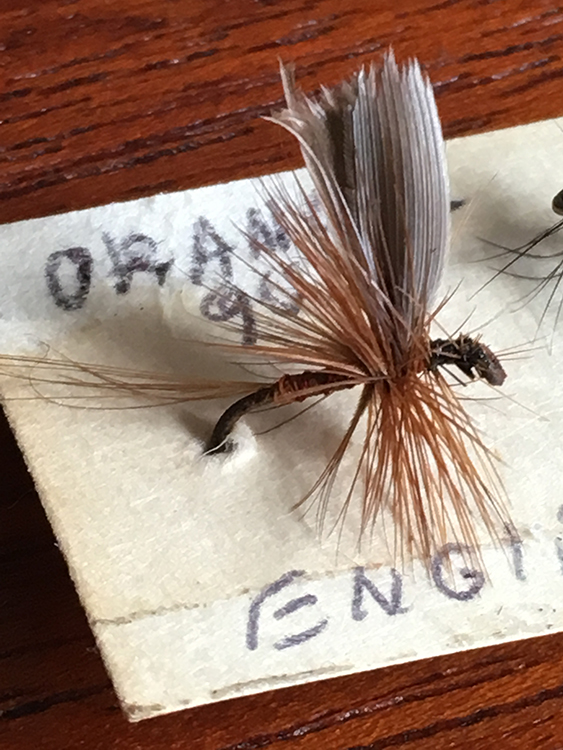 Clegg was, like Skues, a member of the Fly Fisher's Club of London and had access to Skues' papers and his archive of flies and tying materials. The Clegg version is a bit faded, and the hook slightly rusty. But the orange is unmistakable. A little while back, a famous UK angling outfitter was still selling burnt orange condor quill--it seems to have been quite a popular pattern. 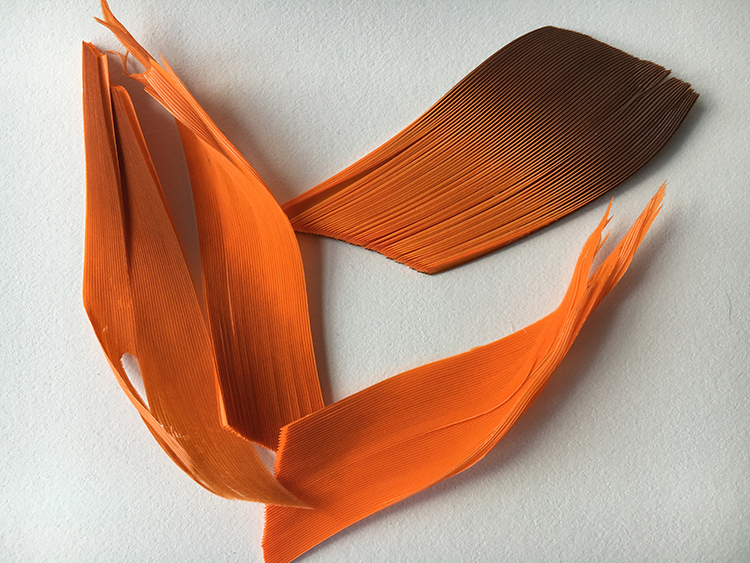 Like the Flick patterns, I need to research Skues' dressing a bit more--which calls for a trip to London, I suppose. If anyone has anything to contribute on the Orange Quill, please do.

Here are ar pictures of the insect that Skues referred to as a blue winged olive -- it's related to our Hendrickson, not to any Baetis: 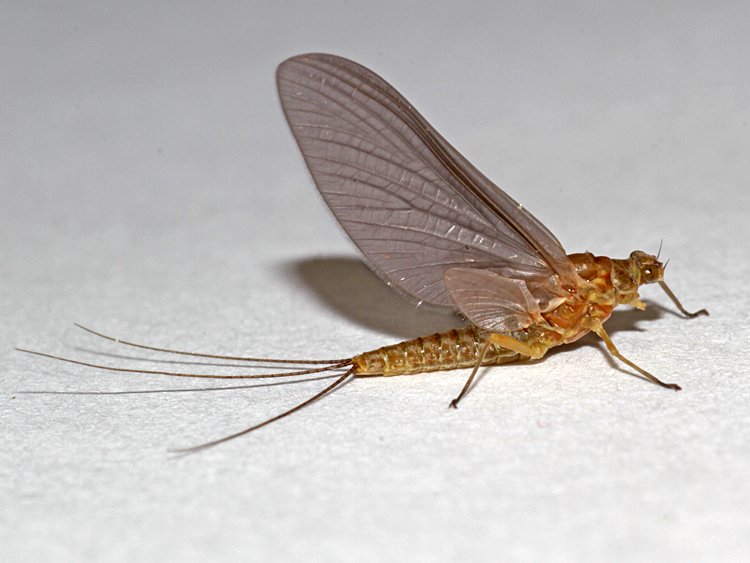 Spinner of the same dun: 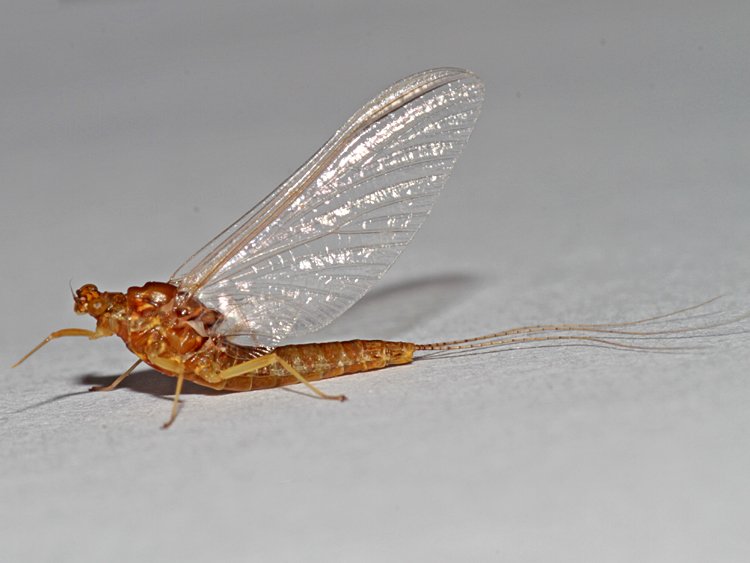 As you can see, orange isn't that far-fetched as a color choice.

The spinner of that fly is called the Sherry Spinner, and gets imitated by a fly similar to our rusty spinner. (We see rust, the Brits see booze!) Since I usually use a Partridge and Orange, tied with hot orange, as a rusty spinner during the Hendrickson hatch, I'm not in the least surprised that a hot orange fly would work at dusk for a BWO spinner.

Thanks, Bob!--This helps explain a lot--I have seen some of these "olives' before, but had not heard of the phrase 'Sherry Spinner'--I suppose Oloroso or Amontillado?--.

Skues was adamant that Halford had gotten in wrong with his Red Quill (which was dyed Peacock)--but not knowing British bugs as well as I know British sherries, I wouldn't know where to go with that argument. Are the BWOs you posted from the UK? Skues insisted his pattern was useless during the day, but only worked at dusk.

Yes, I grabbed them off this guy's website: https://twitter.com/gobirdingeu

The Latin name for the BWO is Serratella ignita. You can find plenty of images by googling that.
Bob
Top

<t>bb <br/>
I can always count on you to wind me up with all of the favorites: Skues; CONDOR; rusty hackle; old hooks, etc.<br/>
<br/>
Yes, this is a deadly pattern, and one of my favorites to boot. I use it from Hendrickson time till the end of June, only at dusk. <br/>
And yes, I believe that is the correct condor quill........ Who knows? Maybe even Skues himself bought some from McHardys back in the day !<br/>
<br/>
Dana</t>
“Time to go fishing”
Top

I wouldn't be surprised if he did! Clegg too!

Skues himself, as much as I can tell from flies I have seen, was a slightly sloppy tier--but I mean 'sloppy' in a good, buggy, way. He was more of an experimenter, and once he hit on a good pattern, had others do his production tying. About the Orange Quills he wrote: "I found George Holland tied the pattern so much better than I did that for many years, till he gave up, I got my Orange Quills tied by him. Afterwards his son and later his best tier, who had set up on her own account, tied them for me. Both have gone, however, and now I find it very difficult to get the pattern dressed as it should be and I have gone back in my old age to dressing it myself." ('Side-Lines', 1932, p. 107)

I'd love to get a sense of how others tie the Orange Quill--so if you (or anyone else) can post some photos, I'd be especially appreciative.

Most I tie with the light, speckled Darbee hackle. But the one that seems to work best is tied wingless with the darker golden dun Darbee hackle, with a light Darbee tail.

In the picture you posted previously, it appears that the oil is counter wrapped with tarnished gold wire-I think tonight I will tie some up in this manner.
Thanks again,Joe
Dana Thanks, Dana--that looks like a great design, stripped down to essentials. Is that McHardy's Condor Quill? Or are you using dyed and trimmed hackle quill?

Yes-I use the McHardys stuff I bought from them. It’s quite nice.....as is the Irish olive color of theirs(for different patterns)

Hi all,
My local stream, the little river Leven in North Yorkshire, has fantastic hatches and falls of the BWO from about mid-July through to the end of the season on September 30th. The duns start coming of at lunch time and are about a #18 - 20 with olive green / bronze bodies and slate blue wings - a 'Last Chance Cripple' with olive green biot over orange thread body, olive hare's mask thorax and dark cree hackle work fantastic. Then late afternoon the spinner fall starts with the males dancing along the banks and the female's working their way up-stream to lay their bright green eggs in the heads of the pools - when the fish move onto the spinners I use either a # 20 Variant with dark pardo CDL tail, rusty coloured biot over olive green thread and a bright silvery dun hackle or a #18 - 20 spent spinner, this same pattern as the variant but with a figure of eight tied through the hackle to 'flatten' it out - the thread for the figure eight is lightly dubbed with rusty coloured dubbing (Hemmingway's Peacock Dub is my favorite), sometimes I will include a bright green egg sack if I have enough time. On the Leven the spinners are a warm orange / mahogany colour with a distinct green cast to them and tend to be a bit smaller than their relatives 'Down South'
Thanks
Alistair
'Most anglers spend their lives making rules for trout,
and trout spend theirs breaking them' - George Aston
Top
Post Reply
24 posts